Every Friday, we look at a Catholic who lived out their discipleship by placing their talents at service to the common good in unique and interesting ways.

Don’t let me ever think, dear God, that I was anything but the instrument for Your story–just like the typewriter was mine.
—Flannery O’Connor 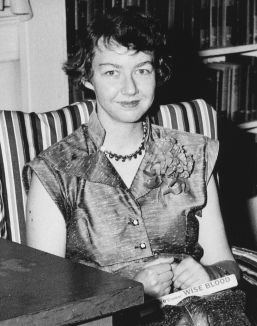 Mary “Flannery” O’Connor might seem like an odd instrument of God’s story. She lived most of her life with her mother on a farm, Adalusa at Millidgeville, GA where she was mostly confined due to her suffering from lupus, an incredibly painful and debilitating disease.  She was a writer of fiction, fiction often described as darkly humorous and even grotesque. She had an unusual affinity for birds, she took care of something like 40 peacocks at Andalusa in addition to a menagerie of other species. She was harsh in wit, easily irritable. And yet she saw the world with a prophetic, apocalyptic vision that she brought to her fiction and her life in profound ways.

Her faith and love for God and the Church were at the deepest heart of everything she did and strove to be, but there was not an ounce of sentimentality in the expression of that faith. There’s a great story to illustrate this, often repeated, but worth telling again. When O’Connor was just out of college she stayed for a time in an artists’ colony of sorts, Yaddo in New York. During her time in New York, she was invited to a dinner attended by then well-known author Mary McCarthy. Never particularly social, Little-known author from Georgia O’Connor was withdrawn through most of the dinner surrounded by New York elites. McCarthy, who knew of O’Connor’s deep faith and trying to draw her out, spoke about the Eucharist opining that it was such a beautiful symbol of Christ’s sacrifice.

Quietly, in her Georgia drawl, but strongly, Flannery O’Connor replied acerbically, “Well, if it’s a symbol, to hell with it.” 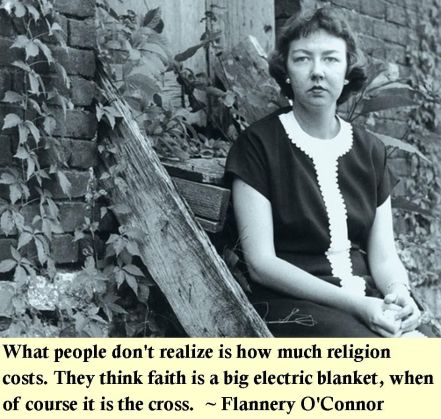 Explicitly expressing faith and religion’s lack of comfort she wrote, “What people don’t realize is how much religion costs. They think faith is a big electric blanket, when of course it is the cross.” She had no illusions about faith being comfortable; it leads to inexpressible joy, yes, but only by a hard-fought fight and through the Cross.

In her fiction, essays and prolific letters, O’Connor constantly tore at the self-comforting and self-congratulating tendencies of people in a fallen world, especially those judgmental and with superficial piety. And she knew the power of grace which suffuses everything she wrote: “All my stories are about the action of grace in a character who is not very willing to support it.”

She avoided overtly religious settings, and her characters are generally misfits, outcasts, freaks, or backwoods fanatics inhabiting a “Christ-haunted South.” But they are stories rich with a sacramental economy, and the invasion of God’s love into a world enslaved to Sin. “A Good Man is Hard to Find,” quite probably her finest story, contains elements that bring out all her most important themes: a superficially faithful grandmother, getting lost on Southern back roads, a murder who has rejected a Christ he very much believes in, violence, and grace found in the most unexpected ways. To read the story is to face the Cosmic conflict between Sin and Grace while laughing.

Flannery O’Connor died of lupus at age 39, but her whole life—her suffering, her art, her discipline, her habits—had all been handed over to God. She had known that to take one’s God given talents and situation, and practice them and shape them well was to give Glory to God. A God who invaded with love the world broken by Sin that Flannery O’Connor prophetically and apocalypticly described, for she knew that were sin abounded, grace abounds all the more.